Archie Battersbee, 12, dies after being taken off life support against his parents’ wishes 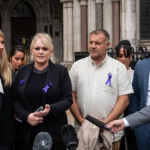 Hollie Dance (center left) and Paul Battersbee (center right)), the mother and father of Archie Battersbee, speak to the media as they leave the Royal Courts of Justice on June 29, 2022 in London, England. Archie’s parents ultimately lost their legal fight to keep their son on life support. He died on Aug. 6, 2022. / Carl Court/Getty Images

Archie Battersbee, the 12-year-old British boy whose family waged an unsuccessful legal fight to stop his doctors from disconnecting him from a ventilator, died Saturday.

“Can I just say I’m the proudest mum in the world — such a beautiful little boy, and he fought right until the very end,” his mother, Hollie Dance, told reporters outside the Royal London Hospital, where Archie died, the New York Times reported. “And I’m so proud to be his mum.”

Archie had been in a coma on a ventilator since April when he was found unconscious with a ligature around his neck. According to news reports, his family suspects he may have been taking part in a social media challenge.

Archie’s doctors at Royal London Hospital had maintained that the boy, whose heart was still beating, was “very likely” brain-stem dead, but a conclusive test was never performed. A UK High Court judge granted the doctors’ request to perform the test, but the test — required by the UK’s Code of Practice — was not carried out because doctors determined there was a danger it could produce a false negative result.

His family, which opposed the brain stem test because they believed it to be too dangerous, argued that Archie needed more time to recover to whatever extent possible.

The family presented video evidence they said showed Archie crying and gripping his mother’s hand. In a June 13 ruling, the High Court judge said the evidence was unconvincing. She ordered that doctors remove the boy from the ventilator, saying the available medical evidence showed that Archie was brain dead as of May 31. An appeals court subsequently upheld the decision.

Archie Battersbee, the 12 year old Catholic boy has died in a hospital in London after his life support was switched off even though his parents were against withdrawing the life support of their son. It was this year that Archie’s family converted to Catholicism. pic.twitter.com/ajjs5bLjao

Last week, Archie’s parents exhausted their legal options when the European Court of Human Rights (ECHR) refused to intervene in the case.

“It was the last thing, wasn’t it? And again our country has failed a 12-year-old child,” Dance said, according to the BBC.

Catholic bioethics experts condemned the decision by the hospital to take Archie off of life support. Before Archie’s death, the Anscombe Bioethics Centre, based in the UK, released a statement saying, “It seems extraordinary that questions of life and death should be matters of a balance of probability rather than determination beyond a reasonable doubt.”

Baptized in the hospital

The bioethics center issued a statement following the announcement of Archie’s death.

“The court battle over Archie Battersbee’s care is the latest example of the dying of children becoming complicated by unresolved conflict between parents and hospital authorities. It seems clear that there are serious problems with the current clinical, interpersonal, ethical, and legal approach to these situations,” the statement said.

“The tragic case of Archie Battersbee must lead to reform so that such conflicts can be averted in the future,” the center said.

“Our last thoughts and our prayers are for Archie’s family, and for Archie himself. May his soul, and the souls of all the faithful departed, through the mercy of God, rest in peace,” the statement concluded.

In court testimony, a family spokeswoman described Archie’s family as “vaguely Christian” but not church-goers prior to his brain injury. Archie, however, was attracted to Christianity because he saw mixed martial artists praying before they entered the ring, the spokeswoman testified.

“Archie had saved up for and then begun wearing a small cross and a St Christopher’s ring in the two years before the accident,” the June 13 High Court ruling states.

“Archie had been speaking about being baptised and wanted his mother to take him to a church service at Christmas. This led to the family having Archie christened as he lay unconscious. Archie’s mother, brother and sister were christened then on Easter Sunday at the hospital,” the ruling states.