Jesus asks us, ‘can I count on you?’ — Pope Francis creates 20 cardinals for the Catholic Church 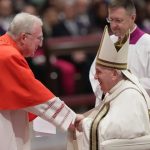 Pope Francis with Cardinal Arthur Roche, Prefect of the Vatican’s Dicastery of Divine Worship and Discipline of Sacraments, at the consistory in St. Peter’s Basilica, Aug. 27, 2022 / Daniel Ibáñez / CNA

“Jesus calls us by name; he looks us in the eye and he asks: Can I count on you?” Pope Francis said in a homily addressed to the College of Cardinals and its new members on Aug. 27.

“The Lord,” he said, “wants to bestow on us his own apostolic courage, his zeal for the salvation of every human being, without exception. He wants to share with us his magnanimity, his boundless and unconditional love, for his heart is afire with the mercy of the Father.”

The pope’s reflection followed a reading from the Gospel of Luke, chapter 12, verses 49-50: “In that time, Jesus said to his disciples: ‘I have come to set the earth on fire, and how I wish it were already blazing! There is a baptism with which I must be baptized, and how great is my anguish until it is accomplished!’”

“The words of Jesus, in the very middle of the Gospel of Luke, pierce us like an arrow,” Francis said.

“The Lord calls us once more to follow him along the path of his mission,” he said. “A fiery mission – like that of Elijah – not only for what he came to accomplish but also for how he accomplished it. And to us who in the Church have been chosen from among the people for a ministry of particular service, it is as if Jesus is handing us a lighted torch and telling us: ‘Take this; as the Father has sent me so I now send you.’”

The pope ended his homily mentioning that one cardinal-elect, Richard Kuuia Baawobr of Wa (Ghana), was not present. Francis asked for prayers for the African prelate, explaining Baawobr had been taken ill.

At the beginning of the consistory, Pope Francis pronounced the opening prayer of the ceremony in Latin.

During the ceremony, the new cardinals made a profession of faith by reciting the Creed. They then pronounced an oath of fidelity and obedience to the pope and his successors.

Each cardinal then approached Pope Francis, kneeling before him to receive the red birretta, the cardinal’s ring, and a document naming the titular church he has been assigned.

Pope Francis embraced each new cardinal, saying to him: “Pax Domini sit semper tecum,” which is Latin for “the peace of the Lord be with you always.” Each cardinal responded: “Amen.”

The new cardinals also exchanged a sign of peace with a number of the members of the College of Cardinals, representative of the whole college.

While placing the red biretta on the head of each cardinal, the pope recited these words: “To the glory of almighty God and the honor of the Apostolic See, receive the scarlet biretta as a sign of the dignity of the cardinalate, signifying your readiness to act with courage, even to the shedding of your blood, for the increase of the Christian faith, for the peace and tranquility of the people of God and for the freedom and growth of the Holy Roman Church.”

As he gave each new cardinal the ring, Francis said: “Receive this ring from the hand of Peter and know that, with the love of the Prince of the Apostles, your love for the Church is strengthened.”

In his homily, the pope said: “The Lord wants to bestow on us his own apostolic courage, his zeal for the salvation of every human being, without exception. He wants to share with us his magnanimity, his boundless and unconditional love, for his heart is afire with the mercy of the Father.”

He also recalled another kind of fire, that of charcoal. “This fire,” he said, “burns in a particular way in the prayer of adoration, when we silently stand before the Eucharist and bask in the humble, discreet and hidden presence of the Lord. Like that charcoal fire, his presence becomes warmth and nourishment for our daily life.”

“A Cardinal loves the Church, always with that same spiritual fire, whether dealing with great questions or handling everyday problems, with the powerful of this world or those ordinary people who are great in God’s eyes,” he said.

The consistory to create cardinals also included a greeting and thank you to Pope Francis, expressed by Cardinal Arthur Roche, prefect of the liturgy dicastery, on behalf of all the new cardinals.

“All of us, coming from different parts of the world, with our personal stories and different life situations, carry out our ministry in the vineyard of the Lord. As diocesan and religious priests, we are at the service of preaching the Gospel in many different ways and in different cultures, but always united in the one faith and the one Church,” Roche said.

“Now, in manifesting your trust in us, you call us to this new service, in an even closer collaboration with your ministry, within the broad horizon of the universal Church,” he continued. “God knows the dust of which we are all made, and we know well that without Him we are capable of falling short.”

Roche quoted Saint Gregory the Great, who once wrote to a bishop: “We are all weak, but he is weakest of all who ignores his own weakness.”

“However, we draw strength from you, Holy Father,” he said, “from your witness, your spirit of service and your call to the entire Church to follow the Lord with greater fidelity; living the joy of the Gospel with discernment, courage and, above all, with an openness of heart that manifests itself in welcoming everyone, especially those who suffer the injustice of poverty that marginalizes, the suffering of pain that seeks a response of meaning, the violence of wars that turn brothers into enemies. We share with you the desire and commitment for communion in the Church.”

At the end of the consistory to create cardinals, Pope Francis convened a consistory for the cardinals to give their approval to the canonizations of Blessed Artemide Zatti and Giovanni Battista Scalabrini.

The new cardinals are:

— Cardinal Arthur Roche, 72, prefect of the Congregation for Divine Worship and former Bishop of Leeds (England);

— Lazarus You Heung-sik, 70, prefect of the Congregation for Clergy and former Bishop of Daejeon (South Korea);

— Jean-Marc Noël Aveline, 63, Archbishop of Marseille, the first French diocesan bishop to get the honor during Pope Francis’ pontificate;

— Peter Ebere Okpaleke, 59, Bishop of Ekwulobia in the central region of Nigeria, who was created bishop in 2012 by Benedict XVI;

— Leonardo Ulrich Steiner, 77, Archbishop of Manaus, in Brazil’s Amazon region, a Franciscan who played a leading role during the Amazon Synod and as Vice President of the recently created Amazonian Bishops’ Conference;

— Robert McElroy, 68, Bishop of San Diego (United States), whose diocese is suffragan to the Archdiocese of Los Angeles, led by the President of the USCCB, Archbishop José Gomez;

— Anthony Poola, 60, Archbishop of Hyderabad (India), a bishop since 2008 and the first dalit to become a cardinal;

–Paulo Cezar Costa, 54, Archbishop of Brasilia (Brazil), the fourth archbishop of the Brazilian capital to become a cardinal;

— Giorgio Marengo, 47, Italian Missionary of the Consolata and Apostolic Prefect of Ulan Bator in Mongolia, the youngest cardinal in recent history, along with Karol Wojtyla, who also was created a cardinal at 47, during the consistory of June 26, 1967.

Furthermore, Pope Francis appointed the following prelates over the age of 80, who are therefore excluded from attending a future conclave.

Jorge Enrique Jiménez Carvajal, 80, Archbishop Emeritus of Cartagena (Colombia); Arrigo Miglio, 80, Archbishop Emeritus of Cagliari (Italy); Fr. Gianfranco Ghirlanda, a Jesuit and former rector of the Pontifical Gregorian University, who extensively collaborated in the drafting of the  Apostolic Constitution Praedicate Evangelium; and Fortunato Frezza, 80, (Italy) currently a Canon at the Basilica of St. Peter, who collaborated for several years at the Secretariat General for the Synod of the Bishops.

Pope Francis had originally also nominated Ghent Bishop Luc Van Looy, 80, who later declined to accept the post because of criticism of his response to clergy abuse cases.